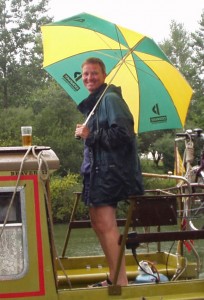 It was with great regret and much sorrow that the Wilderness Boat Owners Club announced in mid November 2010 that Keith Hadden, our Chairman since the post was created in May 2001, passed away suddenly on Tuesday 9th November 2010 due to an unusual heart condition.

Keith’s funeral took place on Monday 29th November at Chilterns Crematorium where his family, relations, work colleagues and his many many friends attended to pay tribute to all that was Keith and to say goodbye. Afterwards at a nearby pub , there was a gathering to remember Keith and to celebrate his life and friendship. Donations in memory of Keith were made to the  IWA Inglesham Lock Appeal and an update on that can be found here: https://cotswoldcanals.com/inglesham-lock-update-summer-2018/.

Keith, with his wife Pat Mason always at his side, was a staunch supporter and user of waterways both in this country and abroad. From 1995, prior to becoming our Chairman, Keith shared with Pat the role of AWCC representative for the Club.  He was also a member of the IWA Chiltern branch and ran their website.

Many WBOC members, past and present, together with members of other canal trusts, associations and restoration organisations, not forgetting the staff of Thames locks and British Waterways, will have so many pleasant memories of Keith and his boundless enthusiasm and passion for anything to do with inland boating and the navigation and restoration of all sorts of waterways. Keith and Pat would turn up and launch their Wilderness Beaver “Arwyn” on to waterways of all sizes:  from the very narrow and short, like the recently restored sections of the Wey and Arun to support the opening of a new lock or the Mon & Brec to support the IWA National Trailboat Rally, to the very large open stretches of water like the Etang de Thau, which links sections of the Canal du Midi in the south of France. They were regular visitors to the waterways of Europe, whilst holidaying on “Arwyn”.

Many WBOC members and others in youth organisations have had their boating horizons expanded dramatically by Keith persuading them to join him and Pat.

It would be impossible to list all the events that others have attended mainly as a result of Keith’s involvement. Events such as the 24 hour Birmingham Canal Network (BCN) challenge, the IWA National and National Trailboat rallies across the country and countless others, have all benefited from the encouragement he gave to others to turn up and support the waterways cause.

Keith had a natural way with people and recognised the efforts of others and made sure they were supported when in need of help. When the WBOC was requested to illuminate and entertain on the lake at Beale Park earlier this year, he was heard to say “we are only doing a very tiny amount to help people who have done a lot more for the IWA than we will ever do”. As a result of Keith’s leadership, the twirling Wilderness boats have become a feature of waterway events at home and abroad. His bank side dry run practices of formation boating manoeuvres with other skippers were a sight to behold, as can be seen here and here, even if they didn’t exactly come out as planned on the water! His presence at such events will never be forgotten, and the bars and pubs along the Royal Canal in Ireland still echo with the sounds of his spirited rendition of the “Old Triangle” during a visit in 1999.

At the start of the new millennium, Keith organised trips for Wilderness boats and crews to try out the delights of the canals of France. Keith surprised the lock keepers by saying Oui! (Yes!) they all will fit into that lock, which resulted in the local French press reporting that the English Navy had arrived in their petit bateaux!  On one trip, when the flotilla was moored but being severely rocked by water skiers at the end of their runs, Keith coined the phrase “water skiers” that he has yelled ever since when about to cross a moored boat.

Away from these big events, his love at all times of the year was, whenever possible, to be out with Pat cruising and watching the river and canal banks changing with the seasons and passing the time of day with other people who were using, enjoying or working on the waterways that he and Pat were passing through.

His friends will also remember his other passions of:

–         Finding solutions – he possessed great resourcefulness and an ability to fix or manufacture anything. Originally, Keith fitted out their boat Arwyn and recently built into it, his own glass fibre water tank, together with his own design of electronic water gauge. However, it was when you were out cruising with him and something went wrong on a boat that these strengths came into their own. He always seemed to have just the right “widget” hidden somewhere on his boat to fix any problem that he came across.

–         Walking and cycling in the countryside. He and Pat would love to bound off up the nearest mountain just to see what the view was like.

–         Good beer, including his home brew (which was excellent). With his trusty Wetherspoon and CAMRA guides, Keith would always know where to get some good beer and food near to a waterway.

–         Sausages! When out in the middle of the country, out would come the trusty BBQ, usually someone else’s, and on would go his sausages. He liked the odd bacon butty too, especially if served up on a cold morning from another boat whilst cruising.

–         Pat his long time and ever present partner and soul mate. Quite simply THE love of his life.

The club’s condolences and love go out to Pat and his close family at this very sad time.

Keith’s sudden passing has left a BIG hole in the hearts of his many friends, which will never be filled. But he will also leave behind so many, many happy memories and his passions, friendship, loyalty and his ever present smile will never be forgotten by all who he knew him.