Wilderness boats first on Canal at Hereford since 1880s

Three WBOC members boats launched on Friday 20th May 2011 at the new Hereford and Gloucester canal trust slipway at Aylestone Park in Hereford. Snapdragon, Grey Owl and Tophyl were the first occupied boats to float on this stretch of the Hereford and Gloucester canal since the 1880s. Another boat Olive, arrived on Saturday evening, fresh from the canal event taking place at Moira also taking place on the same weekend.

The boats were all there to help the Hereford and Gloucester canal trust raise awareness of the canal in the city of Hereford at an event that took place in Aylestone park on Sunday 22nd May.

The stretch of water may not be very long but the work by the trust and by the IWA’s Waterway Recovery Group in this area must be applauded and the WBOC fully support the work going on here. Despite overnight showers, the day of the event dawned sunny and bright, if a little breezy. At the start of the event the Mayor proudly cut the ribbon and pronounced the slipway open. The event opened at 10am and had lots of visitors right throughout the day. There were boats of different sizes, in addition to the Wilderness mini flotilla, there were the two electrically powered trip boats from the Mon & Brec Trust. It should have been one, but there was not room to turn around at the  Hereford end so they didn’t join them up. A coracle. A steam powered launch. A canoe. Then there was a good selection of vintage and veteran cars, a steam traction engine and lorry. As well as other items in the marquees and food and ice cream. A good event at a nice site with lots of local people saying they didn’t know the canal was there and supportive of it being restored. 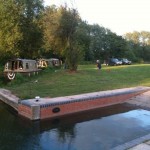 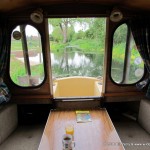 A view not seen for a long time 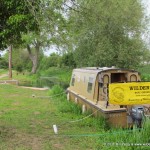 The start of a busy day 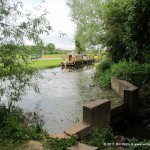 Not a lot of navigable water this end! 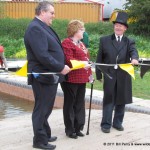 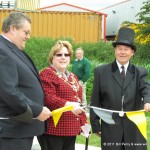 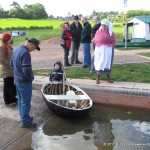 This boat design pre-dates the canal I expect. 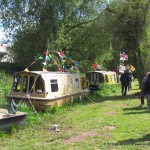 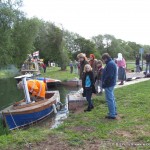 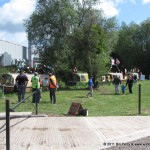 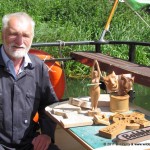 JB showing off his craft and his craftmanship 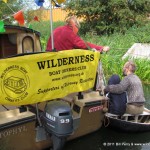 Lots of fun on the water 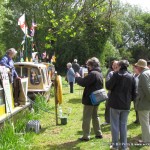 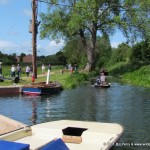 What a great day to be on the water 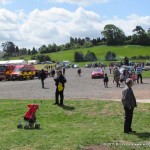 Boats, automobiles but no trains” 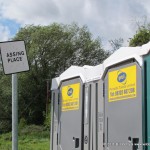 Has someone gone for a P?