Lancaster – a story of two parts

It’s May and this year that means we’re off again to an IWA Trailboat Rally, which is scheduled to start at the end of the month on the upper reaches of the Lancaster canal, adjacent to the Westmorland Showground BUT that is going to be the second part of the story.

Before or after all that, many of the event attendees will be taking the opportunity to explore the delights of the flat and lockless, but definitely not featureless or drab, Lancaster canal. That is of course unless we explore the branch down to Glasson Dock, which we’re sure to do.

Built by John Rennie, the canal features many stone aqueducts, most are small but the one over the river Lune is magnificent. The many bridges are also impressive, strong looking structures that seem to say I can take anything the weather can throw at me.

So even a week before the event, some members of the Wilderness Boat Owners Club (WBOC), prepared their boats, trailers and cars and then started their journeys to Lancashire from many parts of the country, Devon, Somerset, Suffolk, Oxfordshire and Wiltshire to name but a few.

This first part of the story mainly follows the travels of Tophyl, Sloe and Bobbles, but other boats may appear along the way. To break the first part of the journey, Tophyl & Sloe start from Somerset and Devon in late afternoon, and meet up at Gloucester services (northbound) where they plan to eat and sleep. This costs £23 but you also get a £5 voucher to use in the restaurant. 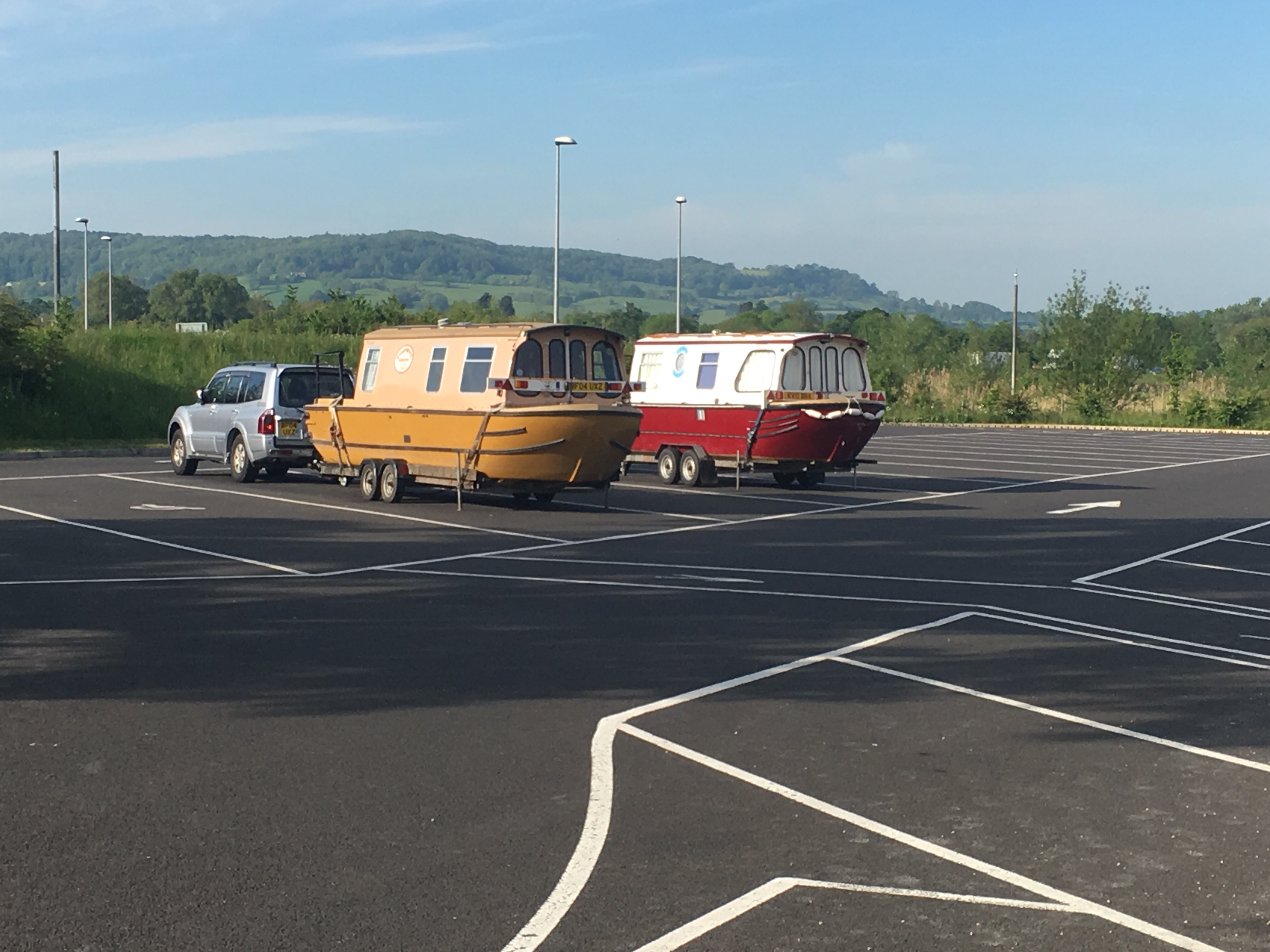 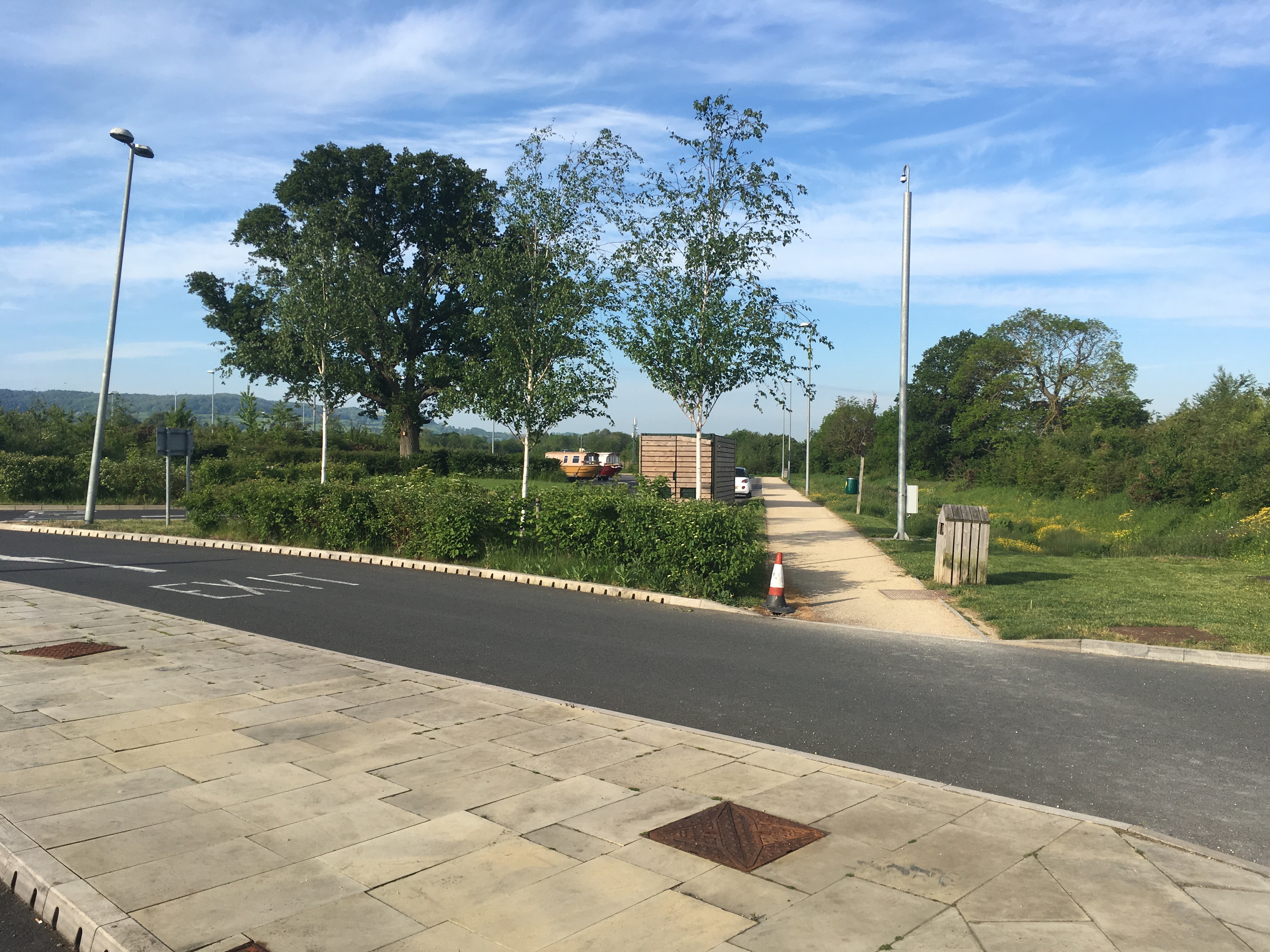 Up for breakfast at 7am and off by 7.30am, with fingers crossed we hope for a smooth and uninterrupted journey free from traffic jams and accidents on the M5 and M6. Both Tophyl and Sloe, arrive at Bridgehouse marina, within a few minutes of each other around 11.45am and are swiftly joined by Bobbles, who were up early travelling from Suffolk. Already on the water is Arwyn, which arrived on Wednesday.

Within an hour all three boats were launched and cars and trailers safely stored at a cost of £50 for 8 days storage. Once watered, it was out of the marina, and a turn left to go south towards Garstang, then through the village and on to a mooring outside Owd Nell’s Tavern at Bilsborrow, and were soon to be joined by the crew of Arwyn. Naturally we had to sample Owd Nell’s drinks and food after inspecting the interestingly laid out menu. And very nice it all was too. 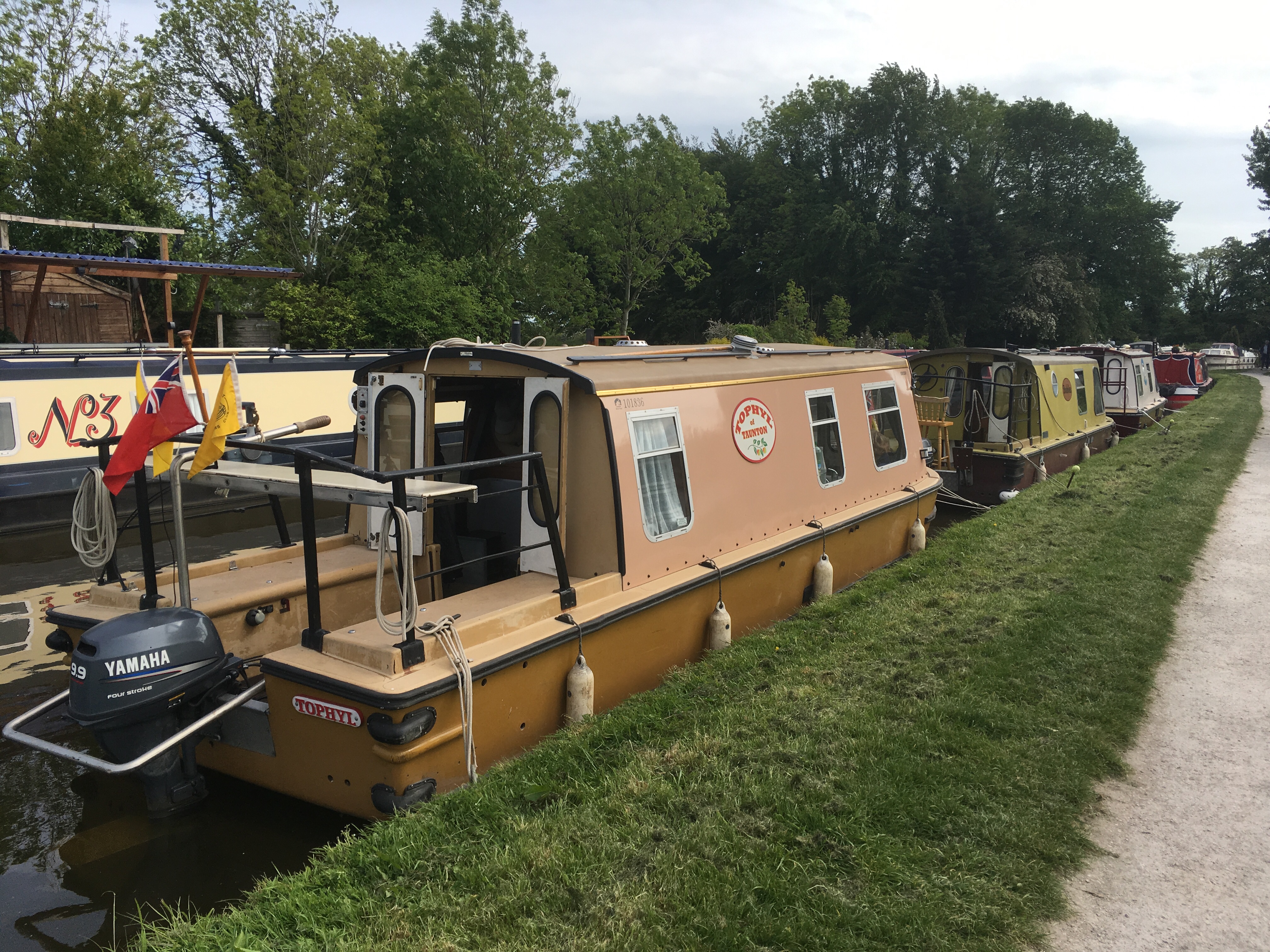 Waking to a bright sunny morning, Tophyl, Sloe and Bobbles were off at 9am heading for the metropolis of Preston and the southern terminus of the canal. The beautiful countryside, with yellow flag irises brightening the edges of the canal, occasionally gives way to more modern features like the BNFL oxide fuels factory between bridges 25 – 19 where there are warnings about a siren and what to do if it goes off, then there are the aerials of RNWS Inskip which seem to follow you, and keep appearing at different points of the compass as you cruise along and then there is the M55 roaring overhead. Finally at bridge 16 the Ribble link goes off but we continued to wards the blocked off terminus, but a few yards further on the canal water disappears under a floating covering of weed, which we proceeded to forge our way through, off and on, till we reached the end of the existing canal just after Ashton Basin. 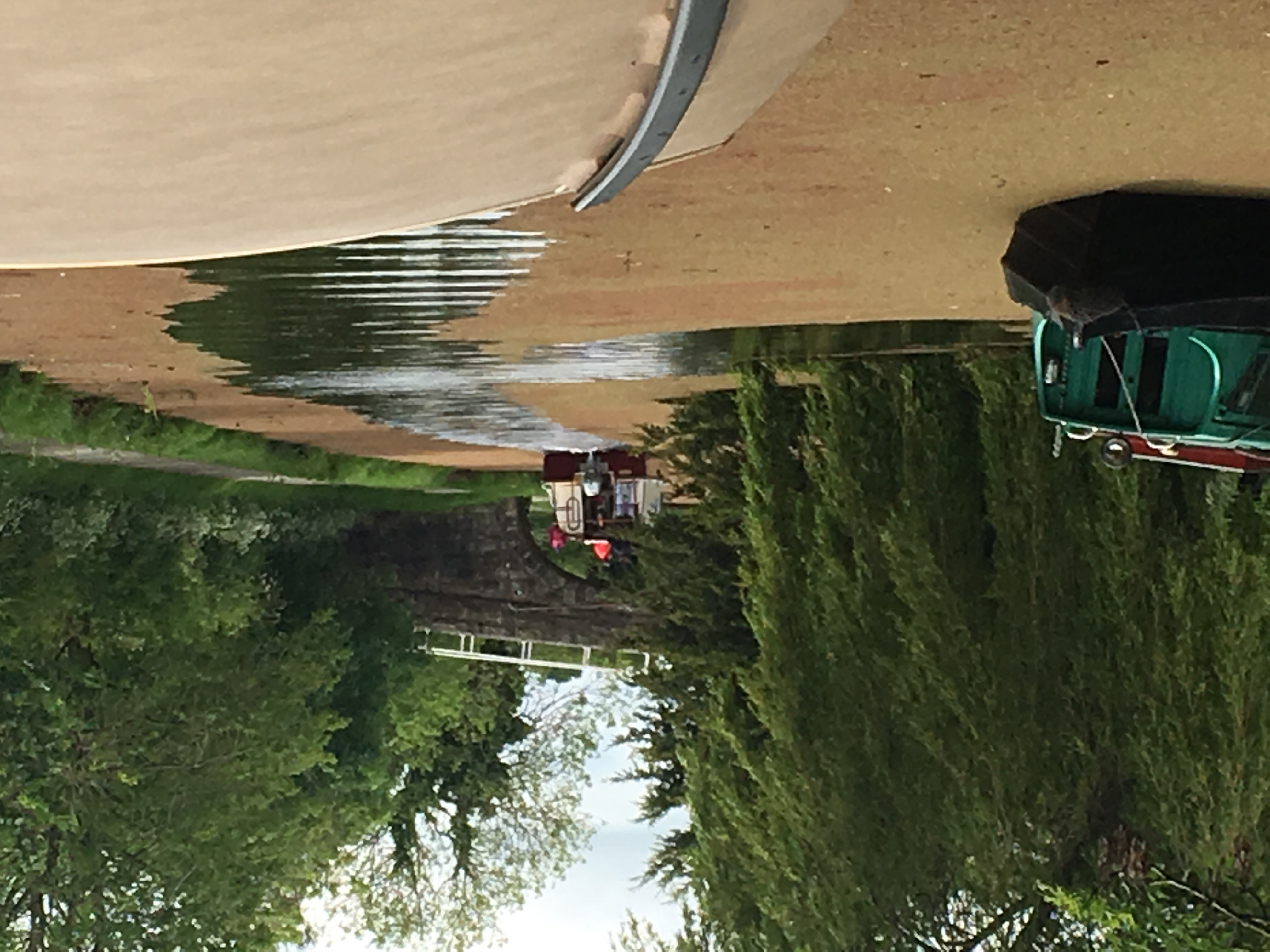 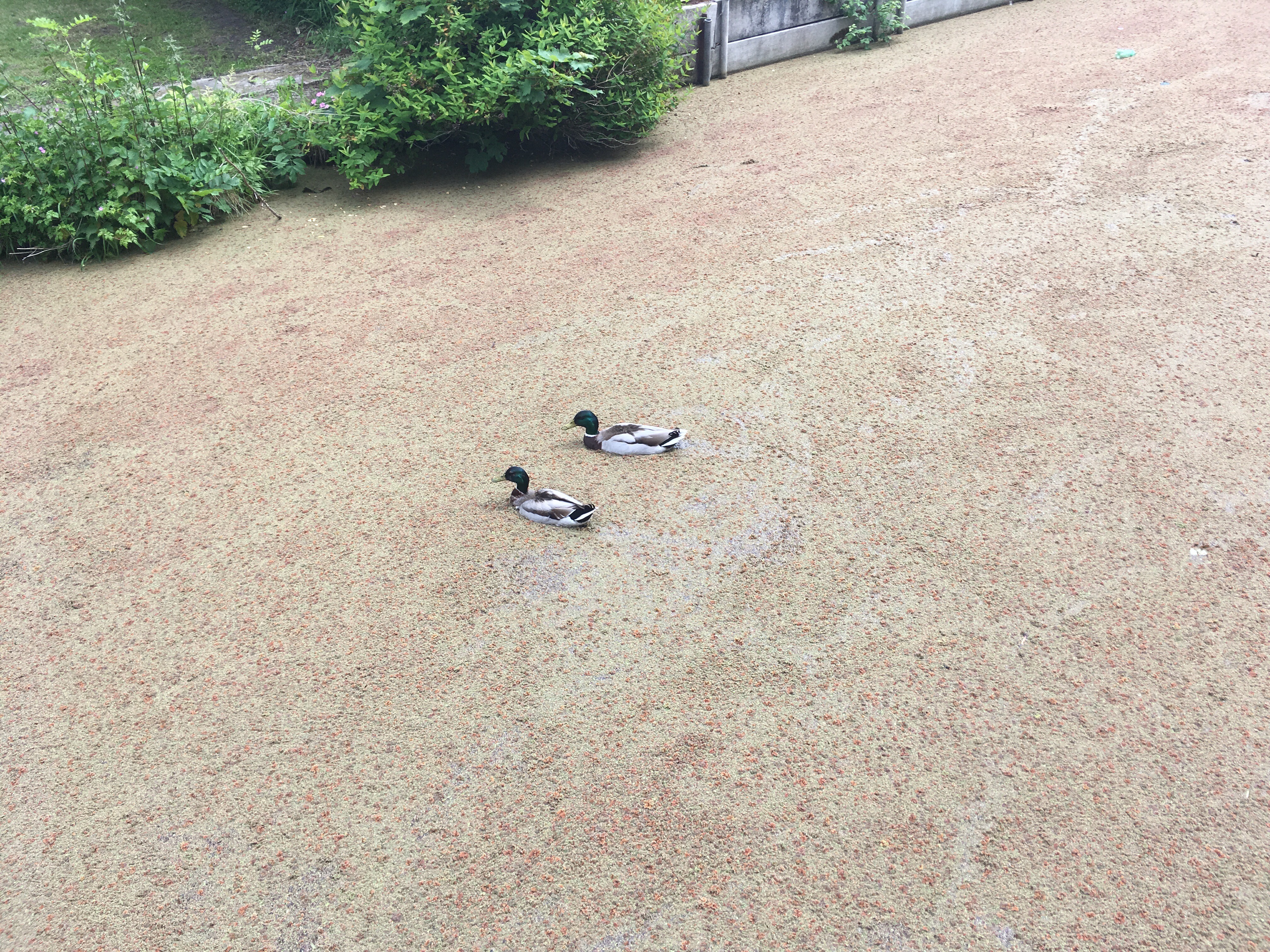 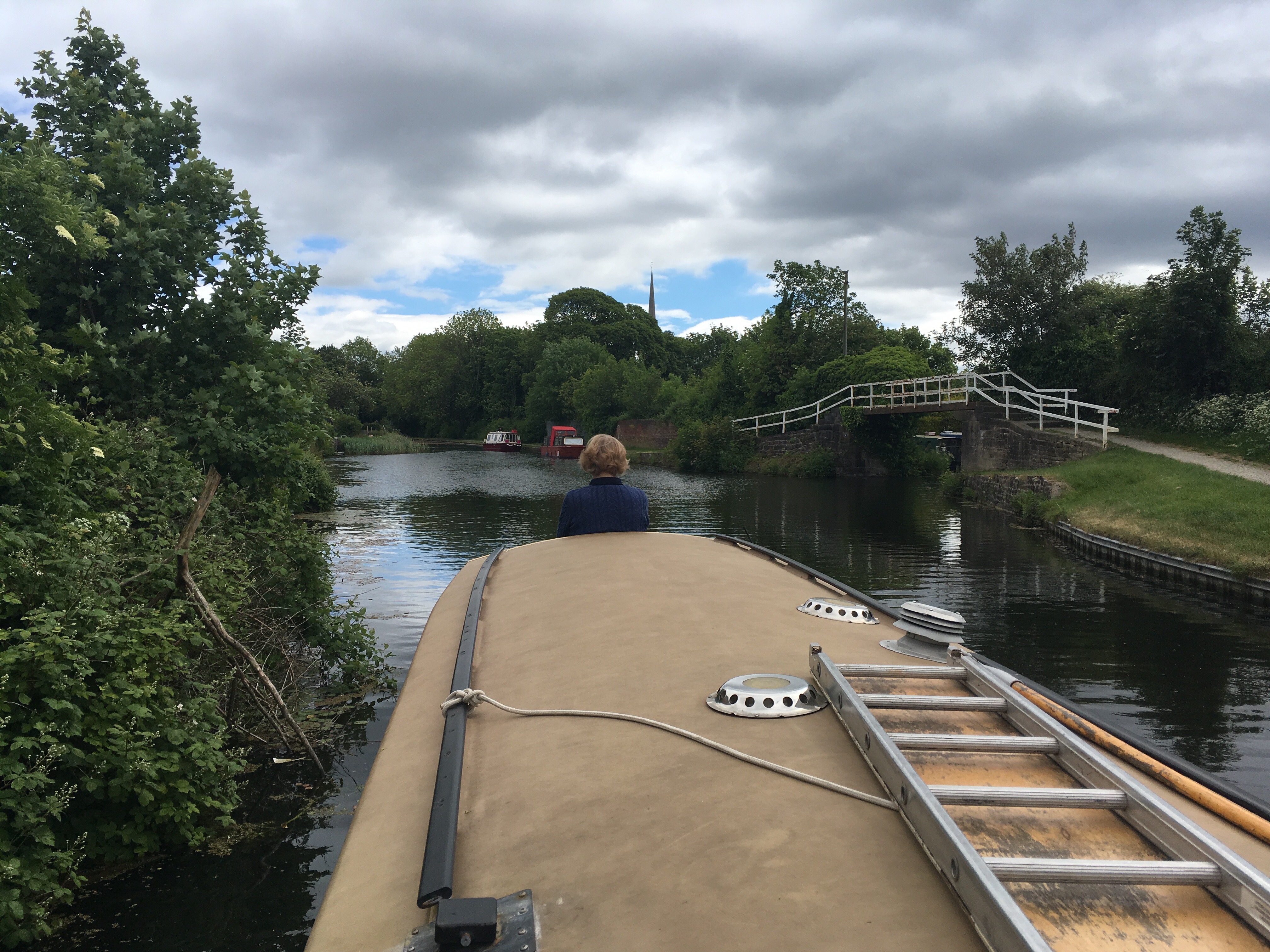 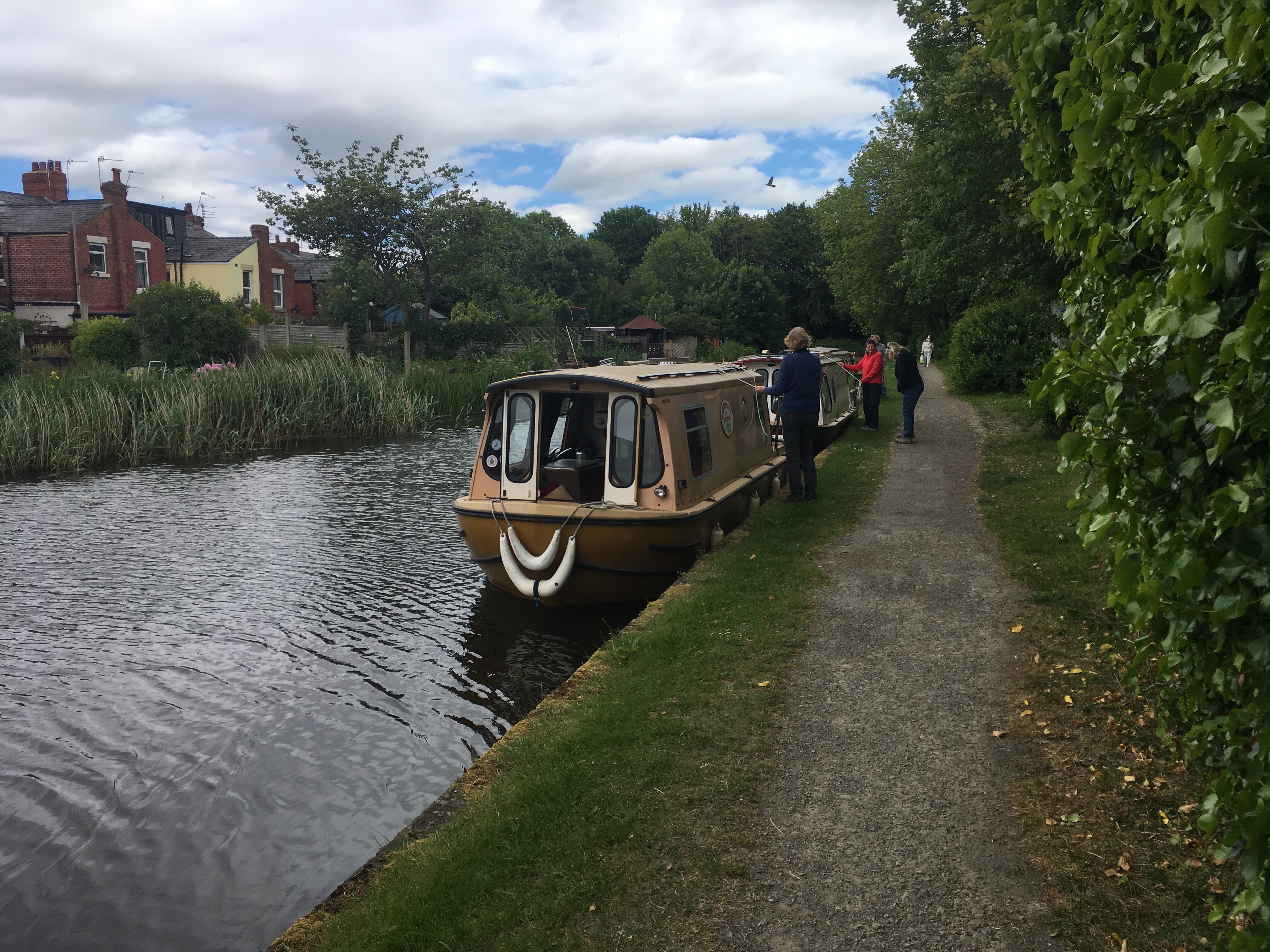 Having been here before, and with little new to see, we turn around heading for the Cadley sanitary station, surprisingly free of boats. Then we realise why, as it’s been closed by CRT, even the water has been turned off! 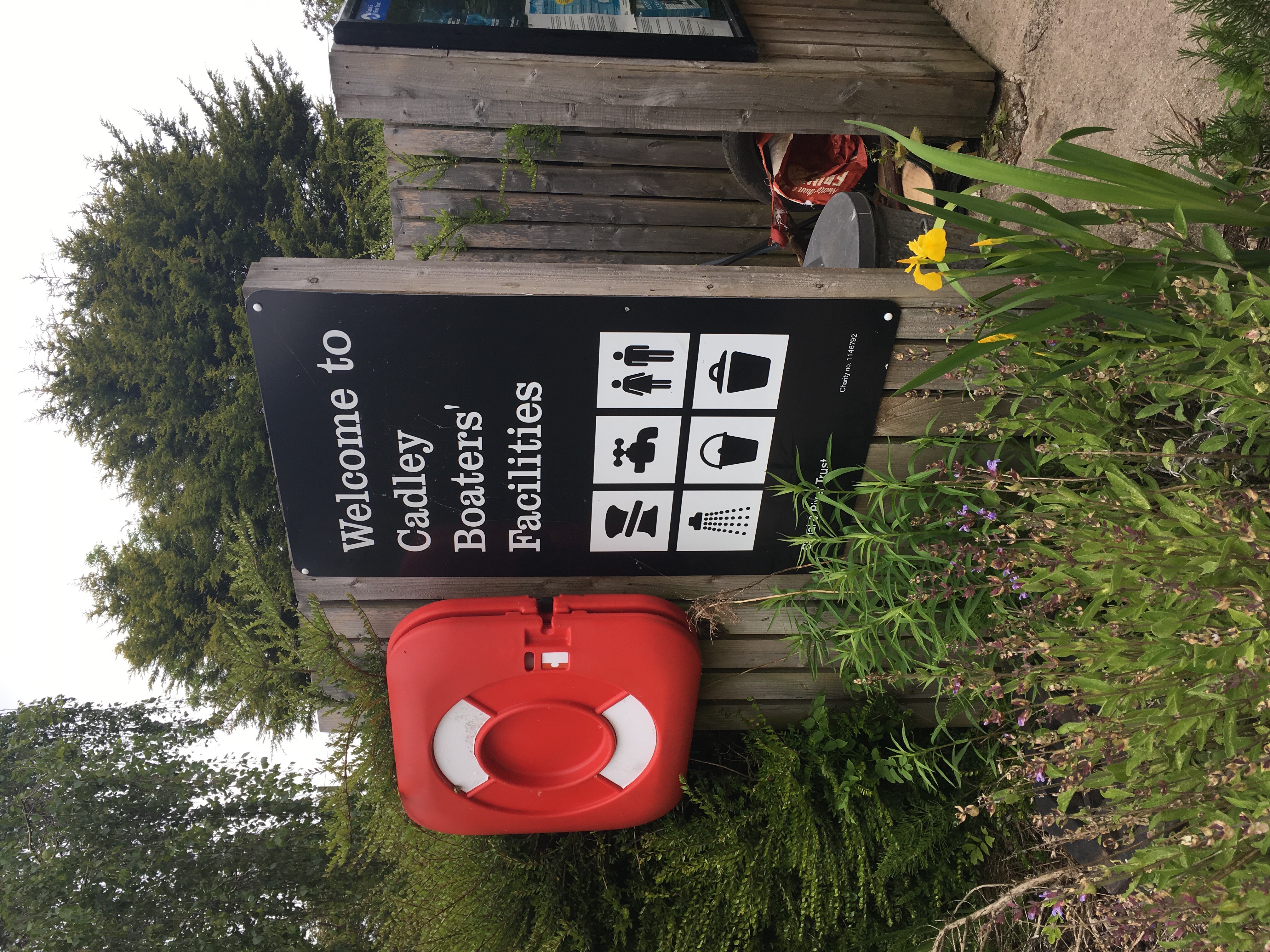 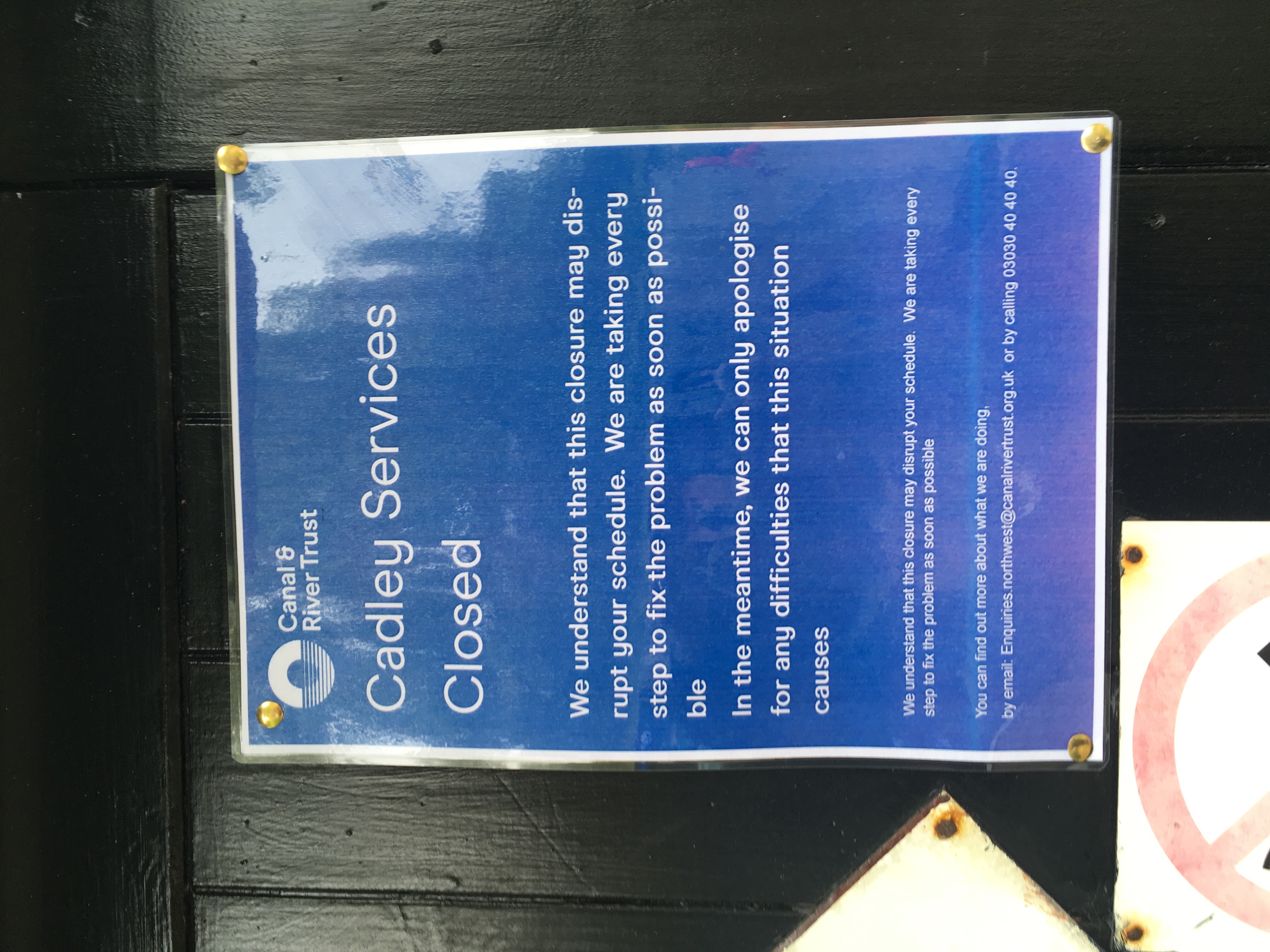 So after a spot of lunch, we head back whence we came to inspect the top of the Ribble link and its impressive art work over the top lock. 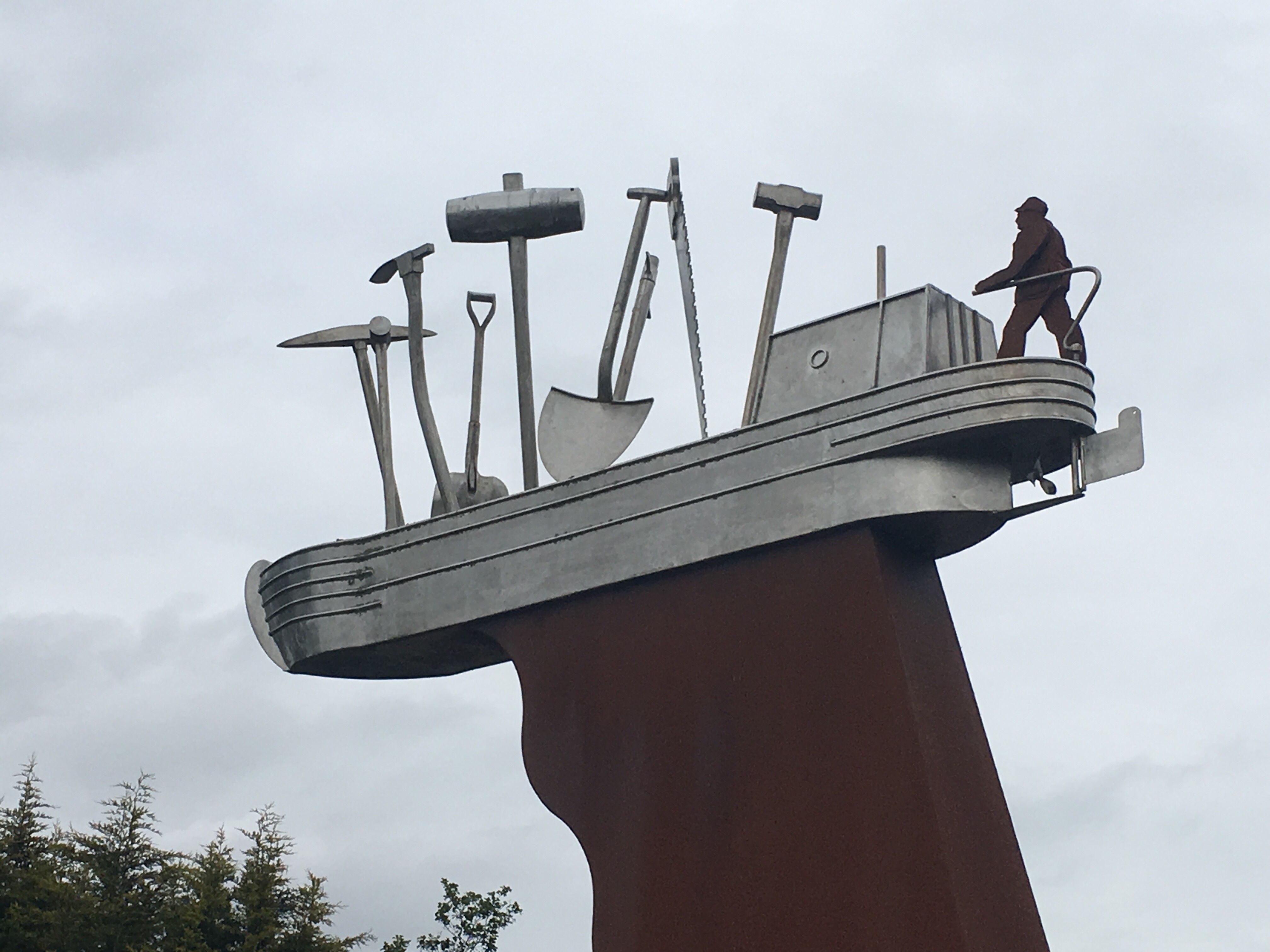 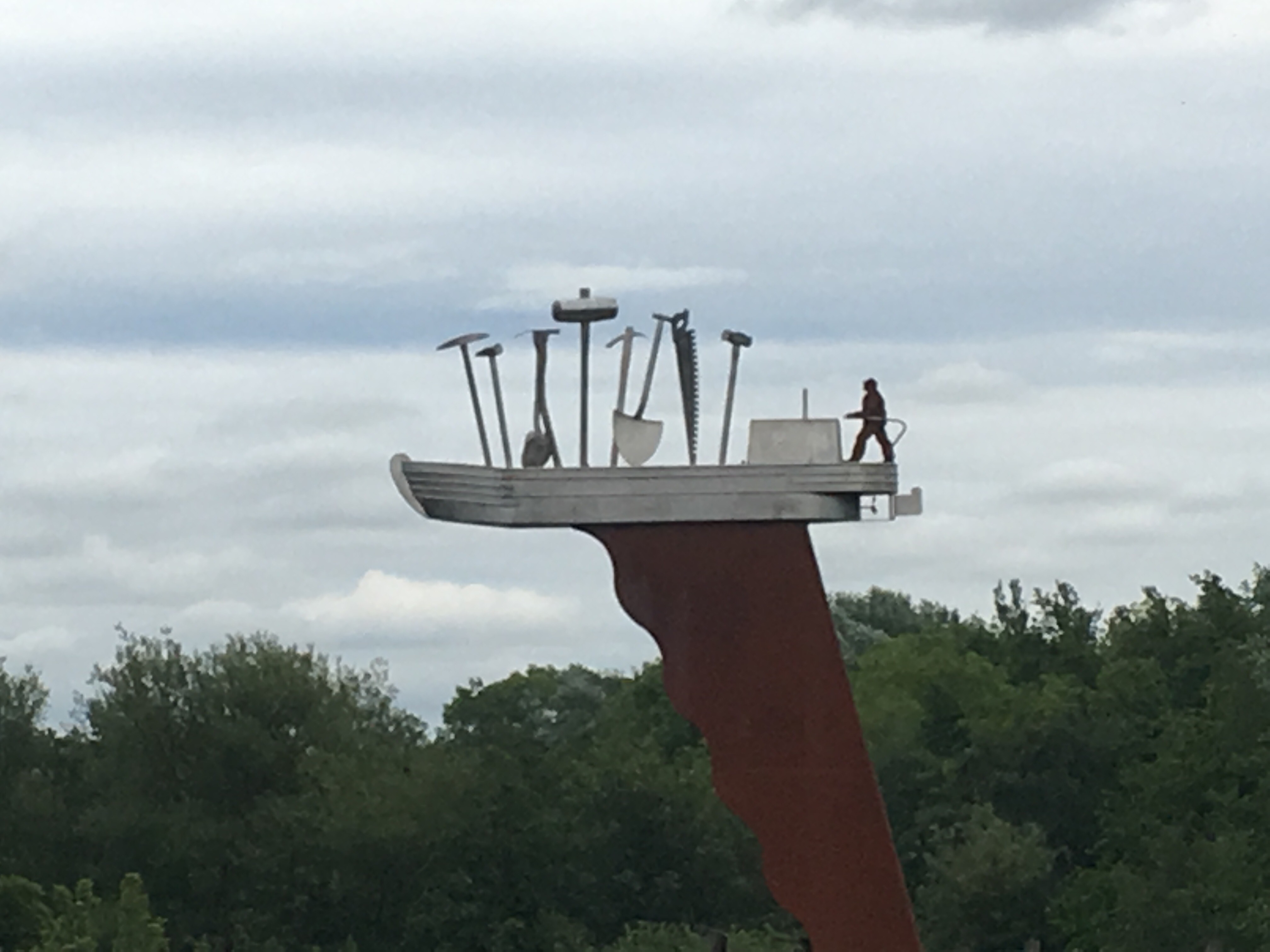 Then we head back north, aiming for a mooring near bridge 26 for another pub meal, this time at the Hand & Dagger, as suggested by the harbour master of next weekend’s event. Very nice it was too, but booking is recommended. 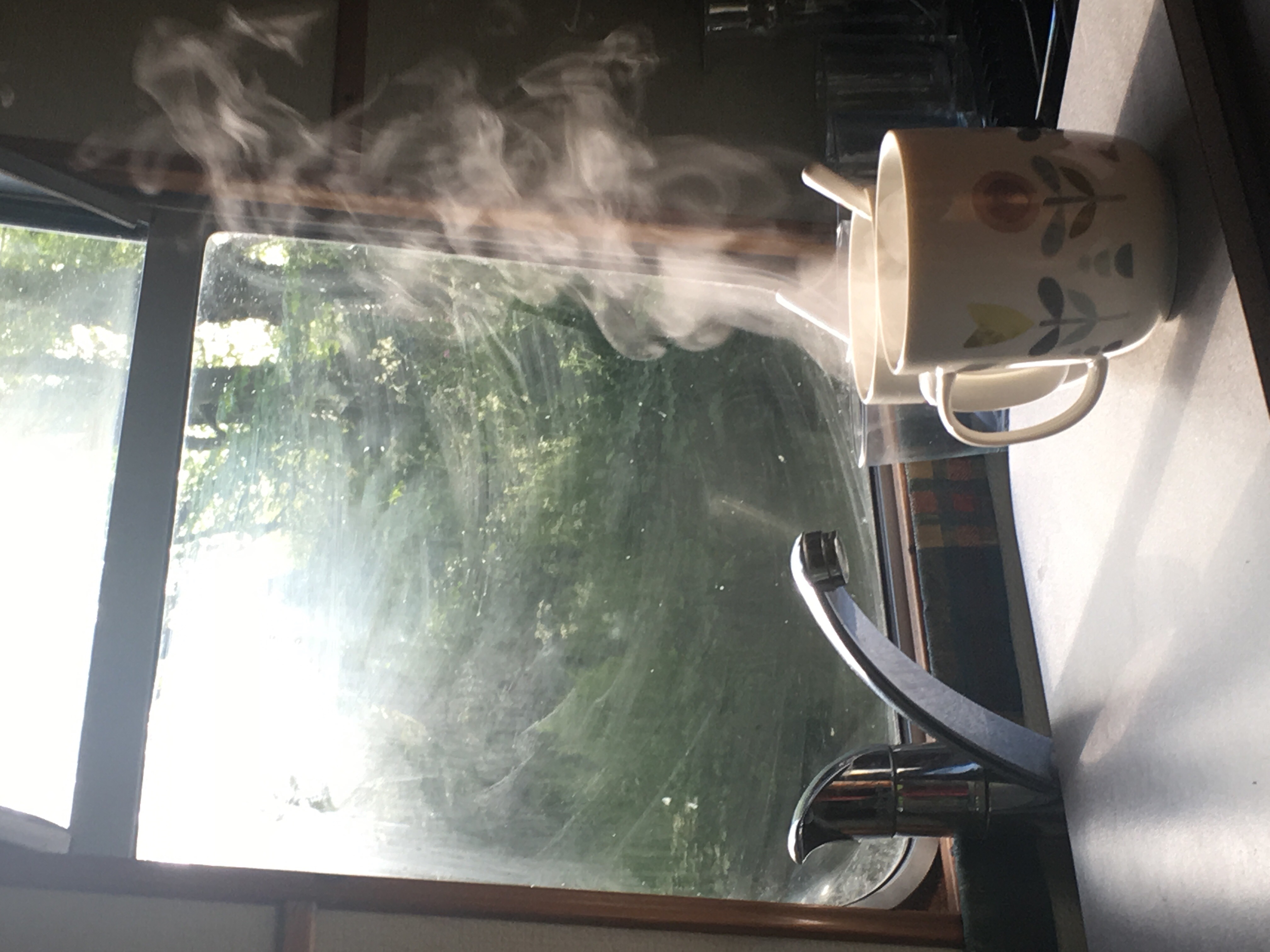 A chilly but bright morning.with the weather forecast to worsen overnight into Sunday, we cruise northwards, making use of the sanitary station facilities at Bilsborrow, prior to mooring up in Garstang to go food shopping. The forecast rain made an early appearance but didn’t last too long.

On the way again, we pass Bridgehouse Marina where we launched and aim to cruise to just before the junction with the Glasson branch, as rain is due overnight and might last till 10am. Eating together onboard just after the ornate bridge 84, we had a peaceful night until the rain started around 4am.

Casting off as the rain passed at 10am, we were soon at the Glasson branch junction. But having passed out from the shelter of the cutting, we soon realised that the rain may have stopped but there was a bit of a gale blowing, and hanging to the boats above the top lock was a bit of a challenge for the crews. 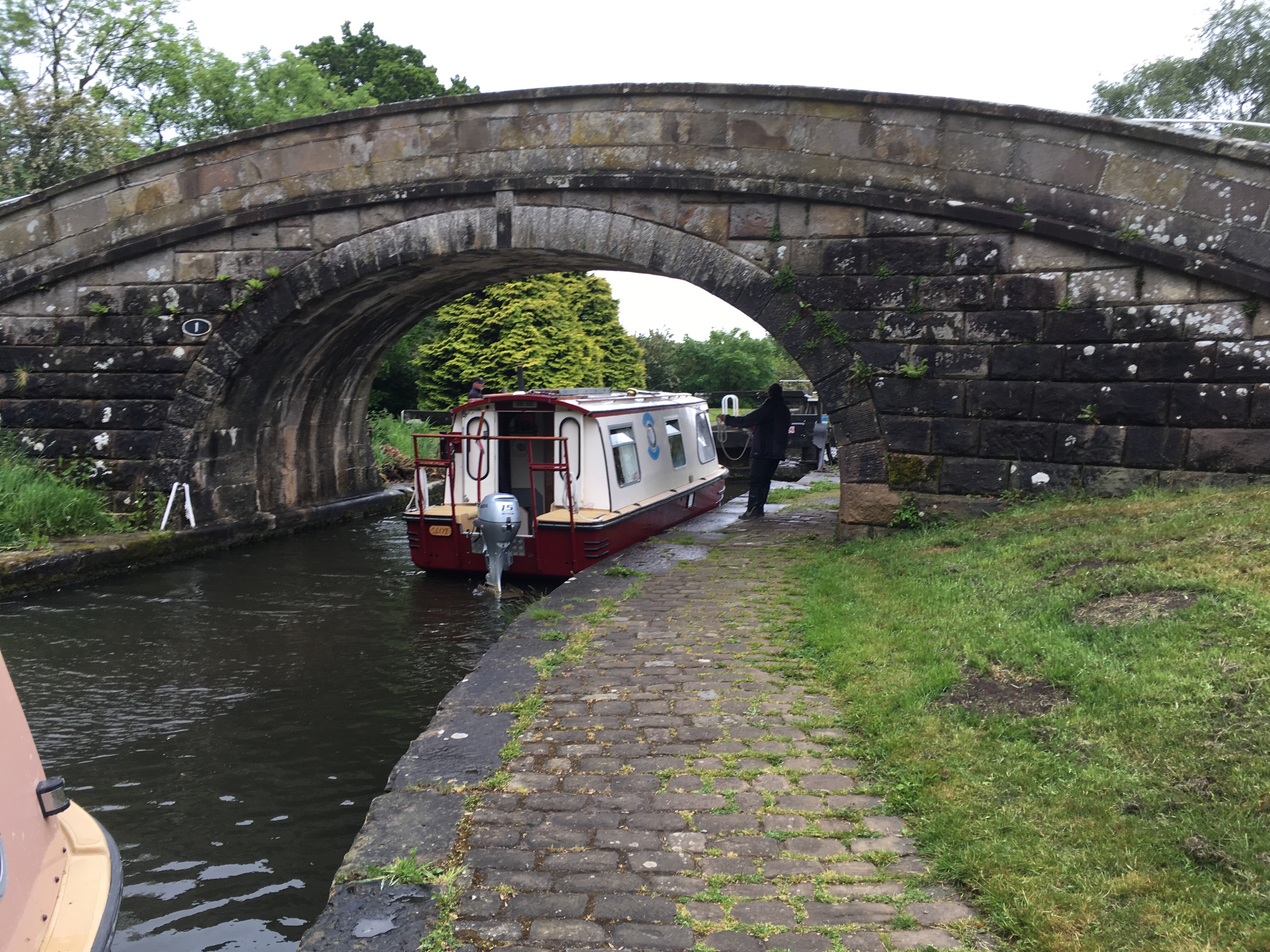 So we took a wise decision to stay on the main line and visit Lancaster instead. Having done some food shopping, we were soon off again and within a few minutes were passing over the Lune aqueduct in a fresh breeze off the sea. 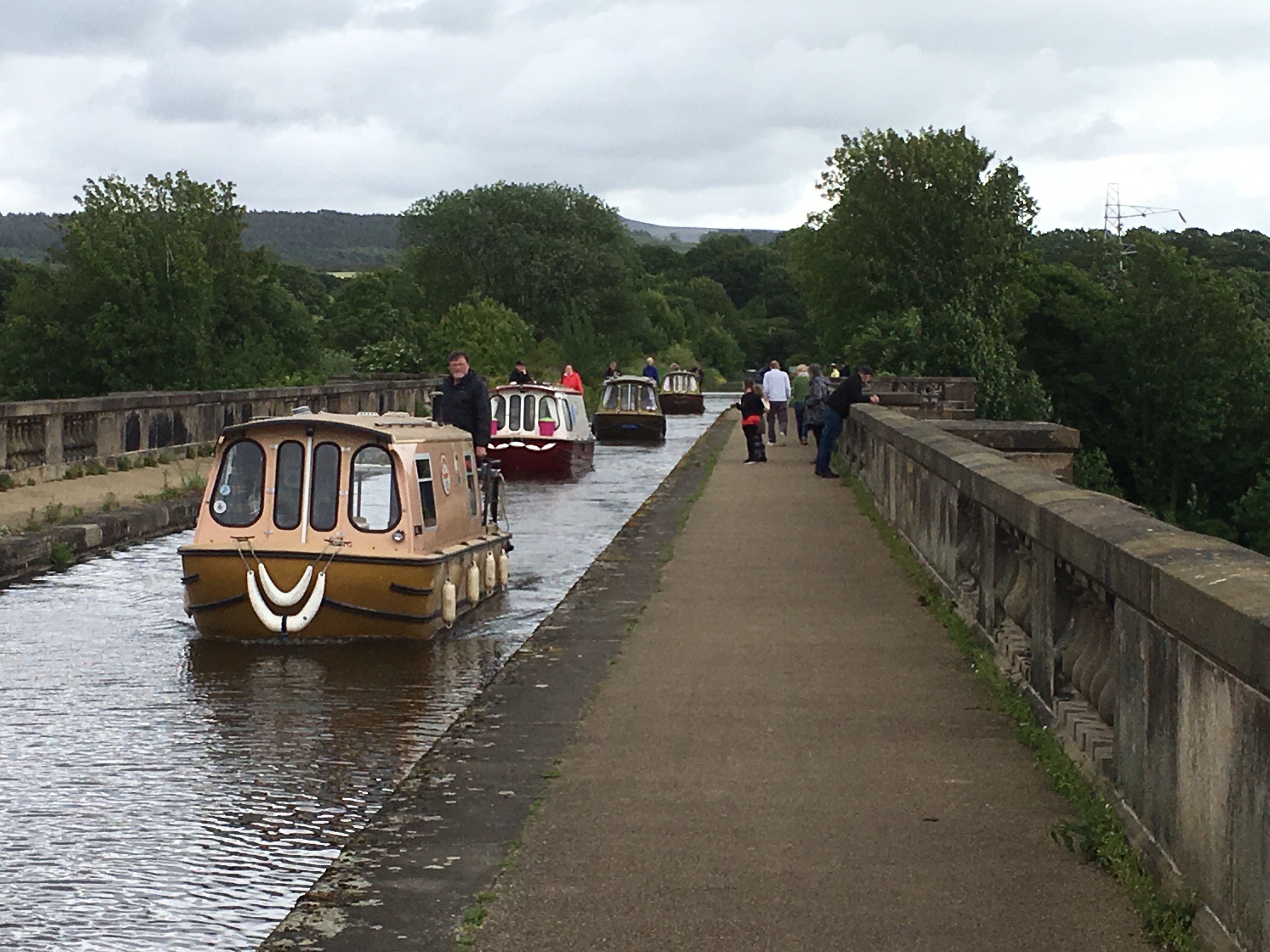 We continued until we found a space on Hest Bank, with a view of the sea. Overnight, the wind got up and there were a few thoughts about how secure our mooring lines were, but we needn’t have worried, as were were all still fastened to the bank once it got light.

Just got up as it started to hammer down with rain. We knew this because we could no longer see the sea nor Morecambe Bay or the mountains beyond. Once this cleared through, we started our engines and headed towards Carnforth and Tewitfield. In Carnforth we were surprised to see that the boat yard on the offside, with slipway, is no longer operational and the land is owned by a Government based “Homes-England”. Another thing missing seems to be the Waterwich canal bus, the stopping points on pontoons just seem to be occupied by private boats and many of the timetables seem to be missing.

Our arrival at Tewitfield heralds the onset of rain, and as the mountains and hills disappear from view. (Again!), we don our wet weather gear and head back to Hest Bank. The further south we go, the more the rain seems to slacken, with it stopping as we moor up. A quiet night results in a good nights sleep. 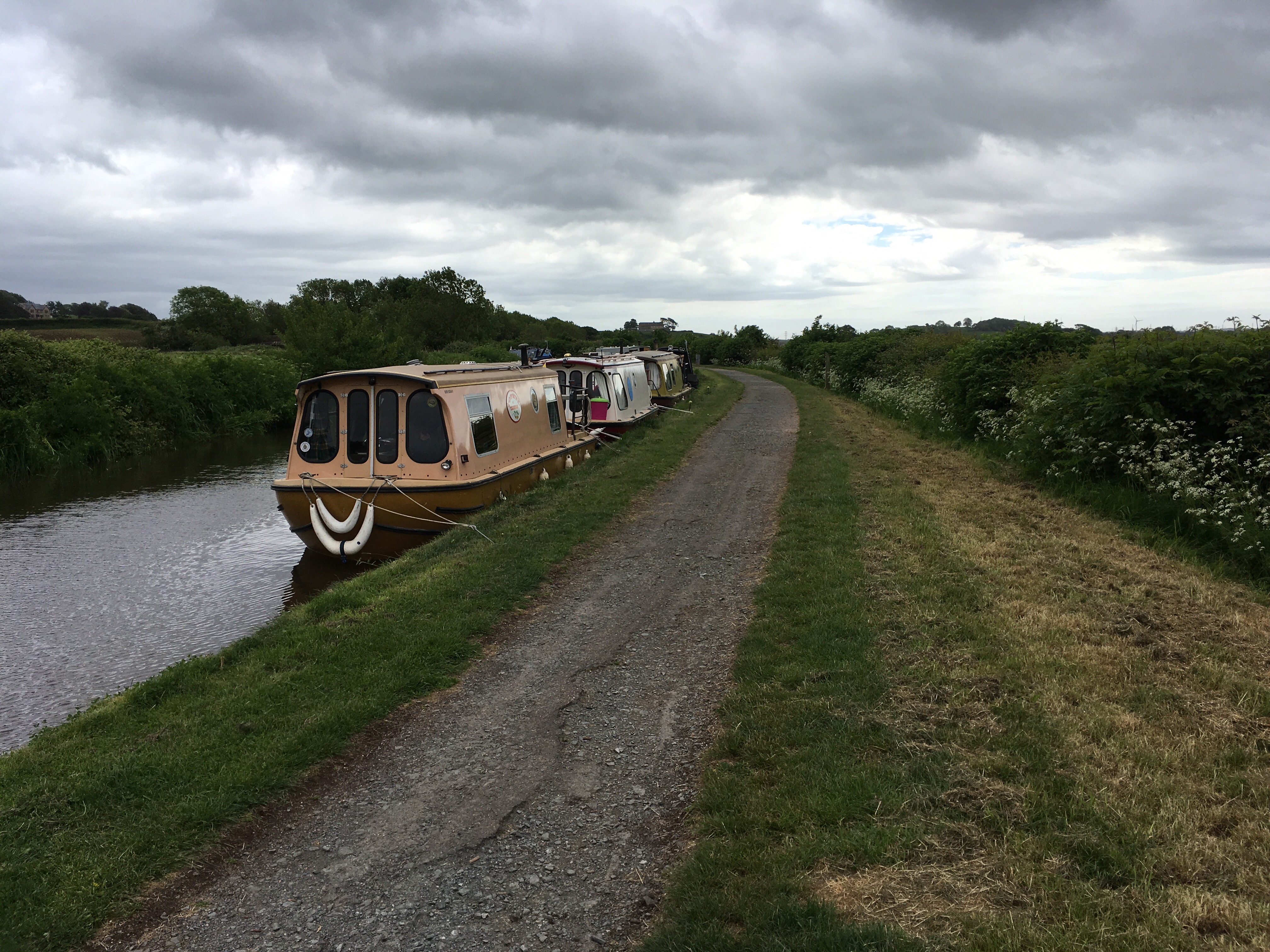 So a quick discussion on today’s destinations and itinerary. Glasson Dock or bus to Morecambe to see Eric Morecambe’s statue. Eric Morecambe won! So we cruise down in sunshine to Lancaster, first to visit the sanitary station, but loo dump was closed. (Seems a frequent occurrence on this canal). Then we moor up on the other side. Oh and on the way into Lancaster we pass a full up water bus taking people on a trip to the Lune Aqueduct. so that answers that question.

A short walk up to the Infirmary bus stop and quite quickly we are on our way to Morecambe at a cost of £5 for a days explorer ticket (as we found out from a helpful local lady, who said it’s cheaper than a return!). Alighting at the Clock Tower stop it’s but a short walk to the impressive Eric Morecambe statue and surrounding sayings, which was busy with visitors. Nice to see so many still remember his laughter legacy. As a backdrop, the statue has Morecambe bay with the Lake District mountains in the background.

It was then a walk along the prom, a cup of tea or coffee, an ice cream and then a hop on the bus back to Lancaster, all in bright sunshine but with a cool wind blowing.

Back at the boats, decided to cruise out of Lancaster, past some alpaca, which were so black they looked like their own shadows. We tied up between bridges 89-90 and sat outside enjoying the afternoon sunshine and the cows in the field opposite. 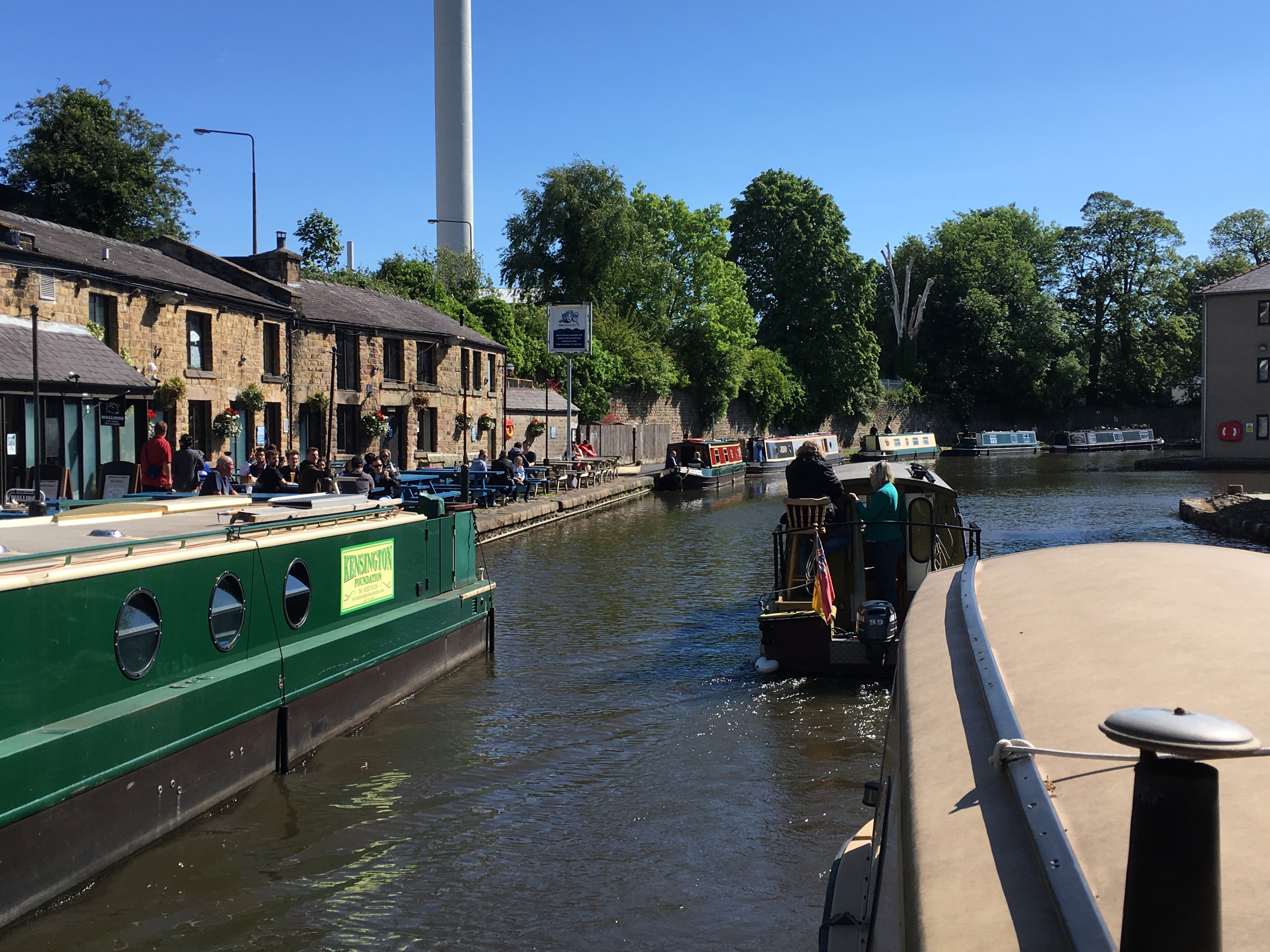 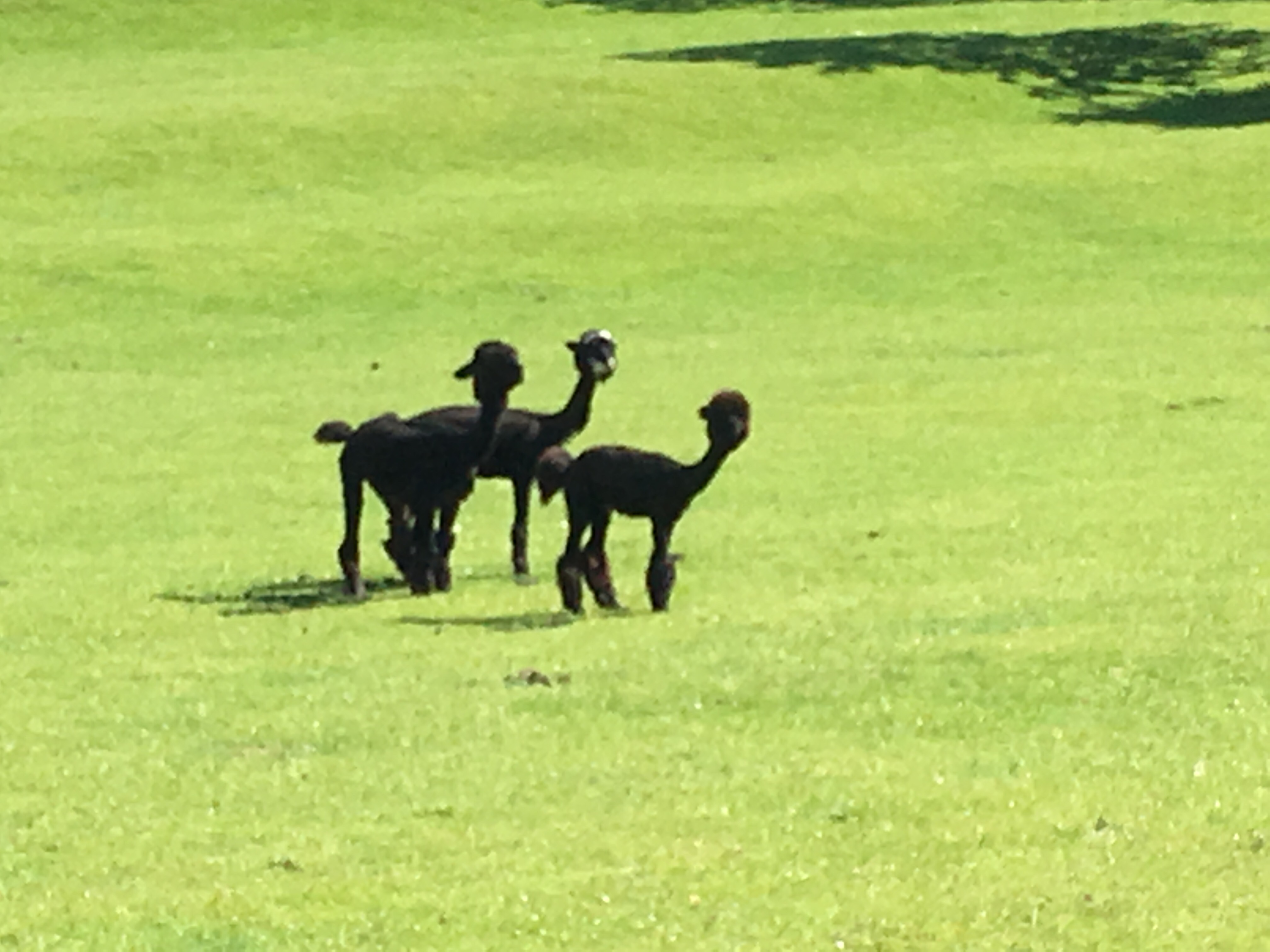 With one eye on the weather forecast, which is forecasting heavy rain later on and the other on the fact, we have to pull out tomorrow (Thursday) to head for the Rally, we set off at 9am, to cruise to Garstang for the weekend’s provisions. Calling in at the working sanitary station at Galgate on the way. As we approached our destination of just before bridge 62, we stop to tie up a boat that has broken away from its stern mooring, which looked suspiciously like someone had untied it. We arrived before the rain at just before noon, as the sky started to grow darker and the wind started to get up. We have. A restaurant meal booked for tonight, which will be a nice end to a weeks cruising. Tomorrow another day and another story. 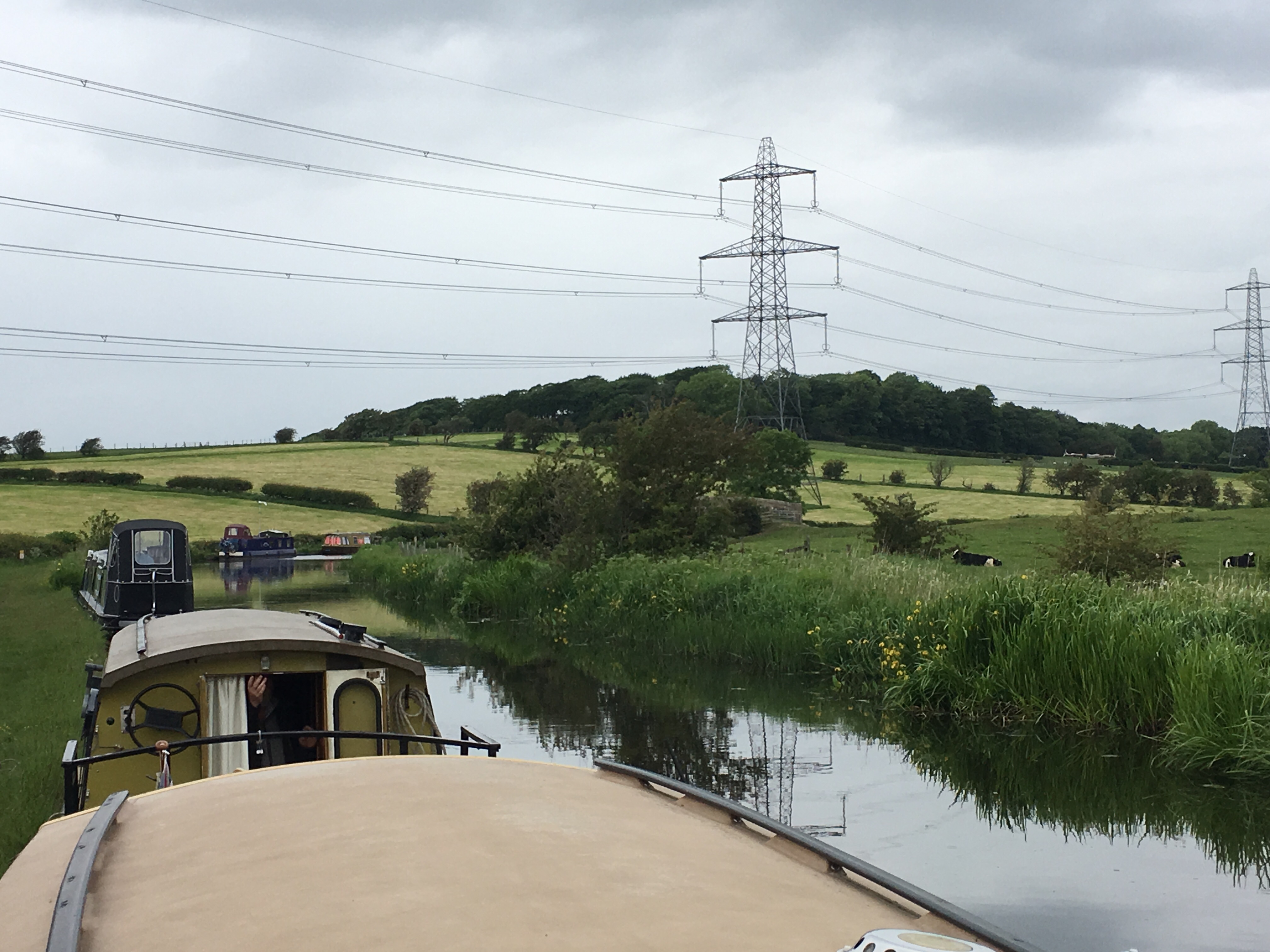 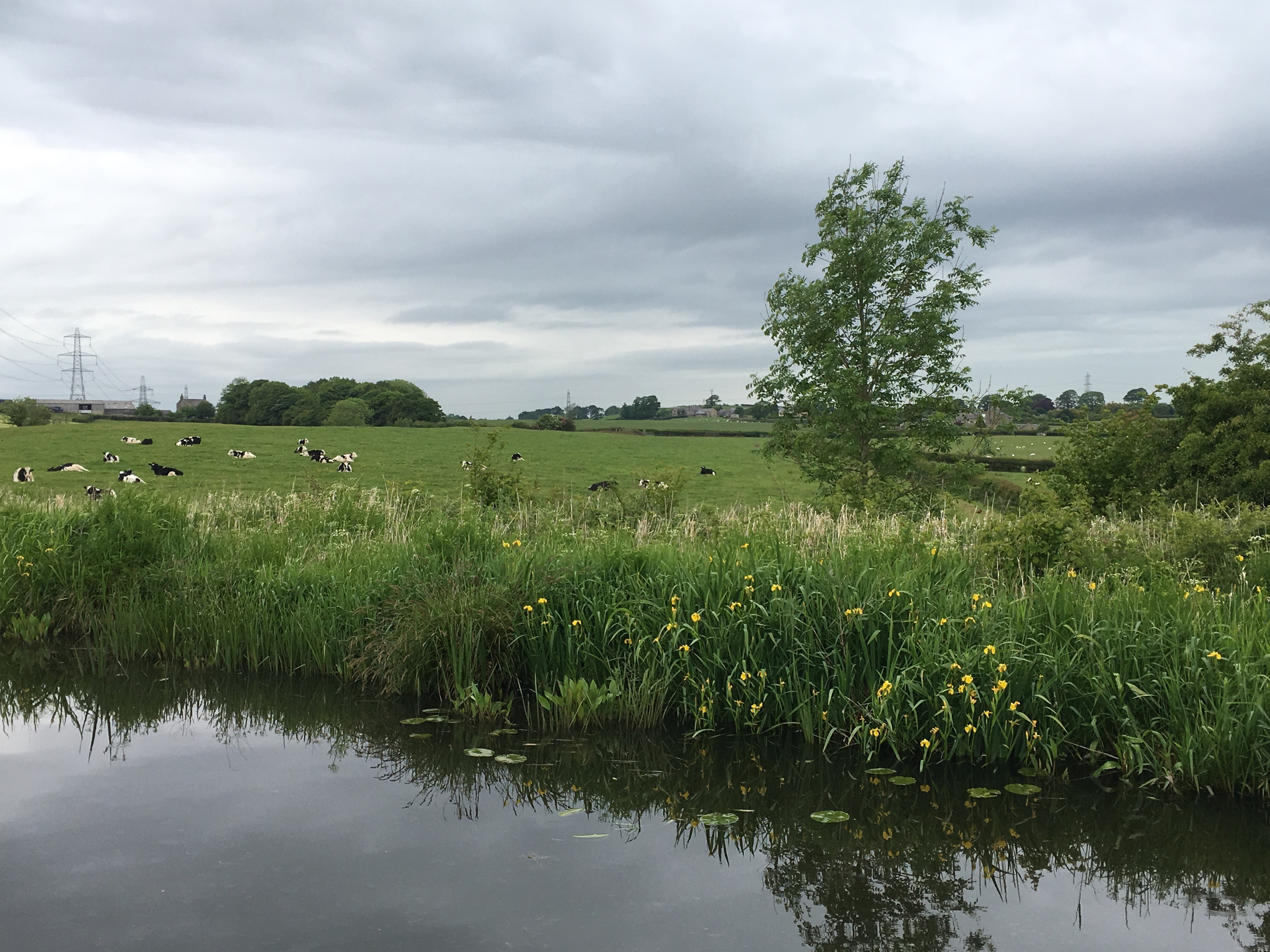 Shame about the pylons marching across the countryside!