We are publishing John Parker’s (WBOC chairman) speech here in full for those members who could not attend the bench dedication, and for those who knew Keith but who are not associated with the Wilderness Boat Owners Club, so you know what was said and where you can find this bench. Also shown below are some pictures taken at the event. We hope whenever you are passing through Godstow lock on the Thames, you will take some time to visit and take a moment’s rest at Keith’s bench and pause to remember Keith. 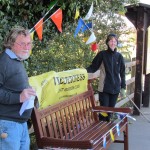 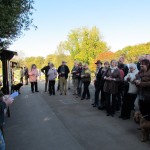 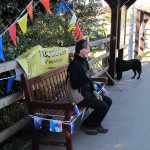 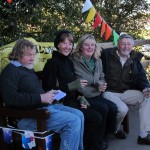 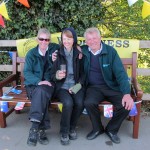 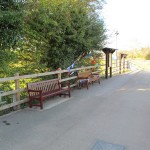 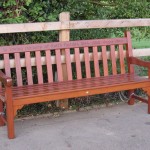 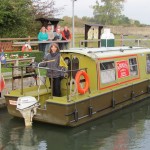 I would like to welcome everyone on behalf of both Pat and the Wilderness Boat Owners Club. Keith would have been surprised and pleased that so many people thought so much about him to have travelled so far.

Before we go on I would like to thank the Environment Agency for agreeing to the bench being sited at Godstow lock.  In particular I would like to thank Sarah Markham the lock keeper at Godstow and Ray Ritchies from Osney lock for being here today, I know that they both knew Keith and Pat very well from their trips whilst moored at Osney Marina each autumn. Without Sarah’s help the bench would not be here today and I know that she will take great care of it.

I would also like to thank Bill and Alison Perry. Bill has done all the work relating to ordering the bench and liaising with Sarah to finalise the delivery and siting. Ali has co-ordinated all of today’s arrangements, in particular with the pub for our meal afterwards.

We are here today to dedicate this bench to the memory of Keith. Although he only officially became club chairman in May 2001 when the club constitution was adopted, he had been the Wilderness Boat Owners Club leader in all but name for many years previous. He was a born leader, totally committed to promoting trailboating in general and Wilderness boating in particular. Nothing was too much trouble for him and we all benefited from his exuberance, his enthusiasm, his generosity and his friendship. Keith always had a smile on his face and a friendly greeting for anyone he met. This bench being both attractive to look at and a great benefit to others will be a fitting memorial to Keith.

Could I ask Pat to unveil the bench.

As I am not a Latin scholar, I got 8% in my year 10 exam, I did what everyone else does and Googled it. There were two hits that caught my eye. The first was for an enterprising company providing carp fishing holidays in France. Whilst I am not sure that Keith would have been interested in the fishing, I am sure that he would have enjoyed sitting in the sun by a river in France, probably with a glass in his hand rather than a rod.

The second gave the true meaning of “Carpe Diem”. It  apparently comes from a poem written by someone whose name I have forgotten and means “Seize the day”. Whilst we would all have expected and hoped that Keith would have been with us considerably longer than his 56 years, I think it is fair to say that he lived by this motto. He had a love of life. He approached everything he did with such enthusiasm that he swept the rest of us along with him. With Pat, he turned adversity into opportunity. He turned redundancy and later the economic downturn into opportunities to go on extended cruises in both England and the South of France.

I am sure that Keith would appreciate that his misfortune has resulted in benefit to others. In the future, when any of us cruise past this spot, we will be reminded of Keith and although we may have a tear in our eye it will bring back nothing but pleasant memories.

Can I ask you to raise your glasses to the memory of Keith Hadden. A loving husband, the best Wilderness Boat Owners Club chairman we will ever have, a great friend and a thoroughly decent guy.